It is not without reason that Namibia is called "the country of the greater kudu". This animal’s true home is stark grey thorn-bush wasted, rocky outcrops and dry desert ridges – all of which can be found in Namibia. It forms the perfect background to display the beauty of this elusive, ghostlike and magnificent antelope of Africa.

The greater kudu ("Tragelaphus strepsiceros / “koedoe” / Grand koudou / Großer Kudu") is very famous and considered by many to be the most handsome of the tragelaphine antelopes (which includes the bongo, eland, nyala, bushbuck and sitatunga).

These tall and majestic mammals of southern Africa have a shoulder height of 100 to 160cm / 3.2-5.2 ft and weigh 120-315 kg / 264-787 lb. Their short, smooth coats vary in color from tan-grey to bluish grey. Males become greyer with age and their necks darker in the breeding season. 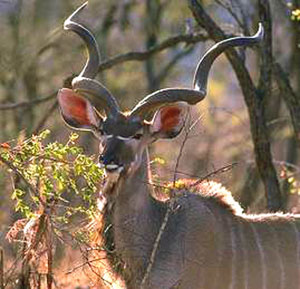 Both males and females have numerous white markings, including 6-10 vertical stripes along the sides, a chevron between the eyes, and cheek spots. All of them have a short upright mane from the top of the head to the shoulders, extending underneath along the throat. The black-tipped, bushy tail is white underneath. When disturbed, the tail is curled up over the back so that the white underside serves as a visual alarm signal for the rest of the herd to follow in dense bushes.

Only males have long, spiral horns that are spectacular, making up to 3 graceful twists with an average length of 51". The horns are seldom used in defense against predators; nor are they an impediment in wooded habitats. The kudu bulls will only tilt the chin up and lay the horns against the back, moving easily through dense bush.

Kudus live in the drier areas of eastern and southern Africa. They browse on a wide variety of bushes, forbs and trees. Low- and medium-level woody growth provides not only food, but also shelter. 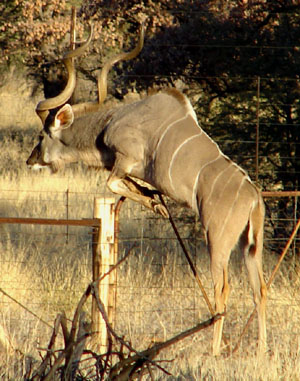 Bulls are more likely to feed at full stretch than cows and will break down branches with their horns if leaves are out of reach.

In dry seasons, they eat wild watermelons and other fruit for the liquid they provide. The lesser kudu is less dependent on water sources than the greater kudu. Where farming has developed near their habitat, kudus will sometimes make nocturnal visits to plantations and vegetable plots.

Kudu are normally more active in the early morning and evening, but become nocturnal where disturbed. During the heat of the day in the Kalahari, kudu can be overlooked easily since they spend nearly all their time hidden under the overhang of trees. Their color gives them excellent camouflage!

These mammals live in small herds although we have seen large numbers of them together on our ranch. In the mating season, males and females occur together. The sexes are separate the rest of the time and during these separations, the bulls stay singular or form bachelor groups. Females, calves and subadults form small family herds. 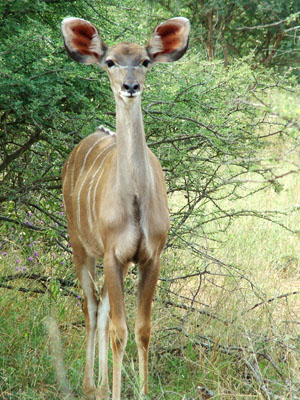 Bulls are very secretive when they are alone and will stand motionless in bushes and under trees to avoid detection. Then only the very experienced human eyes can see them.

When disturbed, a kudu will usually stop and listen to assess the situation and then move away quietly or dash off after giving a loud, sharp alarm bark, which is regarded as the loudest of all the antelope species.

When a kudu is stalked, this loud and strange-sounding bark often surprises people. Social grooming occurs in both family and bachelor groups.

Dominance among bulls is based on size and displays of fighting ability. Fights involve lunging, clashing of horns and wrestling with locked horns that often results in death for both the competitors.

Kudu males are sexually mature at three years and first breed at six years, while females first calve at two to three years. Prime bulls develop massive neck muscles during the mating season due to their fighting, thrashing of bushes and digging up of soil to display their dominance to females.

When a bull has access to females, he checks the females’ reproductive condition by sniffing and flehmen of her urine and genitals.

As a female comes into heat, the dominant bull will mate only once with her since he chooses the best time for conception from the smell of her urine. 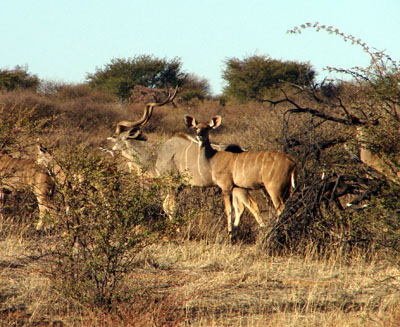 Single calves are born after a gestation period of 210 to 225 days and are hidden in close cover by their mothers, who stay with her newborn for the first day. After that she will return to her herd and visits the calf to suckle it three to five times a day. The calf lies out for its first one to two months and weans at six months.

The horns of kudu start growing at five months. Kudu have a lifespan of ±15 years.

Kudu in the Kalahari Region

According to long time ranchers, kudu were originally not found in the Kalahari region . Since wells were set up by humans, the greater kudu has also occupied territory in this semi-desert that was previously too devoid of water for them.

Our father, Hendrik, put up a high fence around Uitspan Ranch in the early years after 1980. This was an excellent way of conservation of kudu in the Kalahari.

Kudu numbers increased over the following years and we and former visitors to Uitspan were privileged to enjoy, respect and adore the sublime beauty and special hiding skills of this “grey ghost of the bush” (as they were called by Ernest Hemingway in his classic book The Green Hills of Africa). 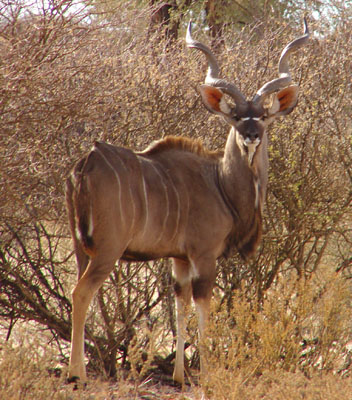 Greater Kudu on Uitspan Ranch... one of Namibia's most famous species.

Just like Hemingway, most hunters experience a passion and a wish to obtain this dream trophy since man are often outwitted by the alertness and fantastic sense of hearing of the greater Kudu.

When taking home a kudu trophy, it serves as a token of a life-changing experience (see our Hunting Pictures) of the qualities and beauty of this special animal (also found here in the Kalahari), as created by our Almighty God.

How can we not be thankful to be part of His Creation?