The Kalahari's climate does not have the distinctive characteristics of normal summer, autumn, winter and spring.

Here we are used to it that June (actually a mid-winter-month in the Kalahari) may offer such a hot day that you will see everybody wearing short sleeves.

Likewise, once in a while, a December evening (mid-summer-month) will send you inside to get a light jacket for a very cool breeze.

I want to give you information from a personal point of view about our typical climate during the months of each season here in the Kalahari so that you will come well prepared when visiting Namibia.

Autumn in March, April and May

The first signs of autumn appear during the shorter, cooler days of March.

Usually by this time we are so exhausted by the heat of summer that these early autumn days are received by all the people of the Kalahari as welcome refreshment.

We love this part of the year most, since by now we have received (if it was a good year) enough rain and this ensures colorful and lush vegetation. The red sand is covered with tall, green grass and the leaves of the trees look fresh and washed. 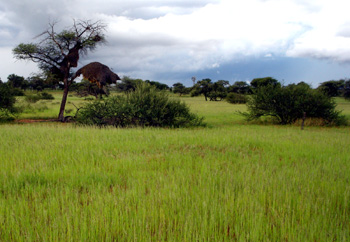 Fall in the Kalahari

Although it is already autumn in March and April, we sometimes have a late rain season and occasional localized showers may occur in these months. For two or three months after good rain, the Kalahari is always at its most beautiful, especially for the farmers living here. The sight of green grass, flowers and new leaves tell the farmers that they need not to worry about food for their animals for the next six or eight months.

Notice that the trophy hunting season of Namibia starts the first of February and ends the last day of November each year. The months of March till August however, provide the best climate for hunting.

Winter in June, July and August

The typical Namibian winter's day, is not very cold at all (25°C - 32°C / 77°F - 89°F). Normally we put on warm jackets for early mornings and evenings, but wear more autumn-like clothes in the middle of the day. Really cold days are the exception and not the rule. 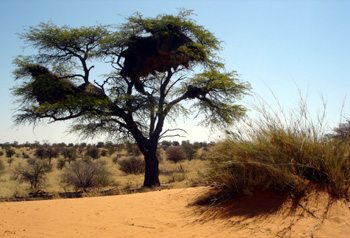 Winter in the Kalahari

Frost at night is common though. The lowest night temperature measured (that we know of) has been –11°C (12.2°F). This may happen two or three nights in a year, but does not happen every year.

In the Kalahari you will experience extremes in temperature, both day and night and between winter and summer.

During the winter months the region’s “outfit” gets a bit more desert-like than during autumn. If we had a good rain season followed by lots of good and tall grass, the grass will get dry in wintertime and color yellow.

Strong northerly winds are common during August, but the farmers belief that it is a sign for good rains in the coming summer.

Spring in September, October and November

The climate are mild and comfortable and nature seems to awaken afterseveral  cold winter nights with frost. Bushes that seemed totally dead and dry in winter, starts to bloom and get new leaves.

This softens the looks of the winter-arid Kalahari. Some shrubs also show off their lovely colors and flowers. The bush with the white cotton-like flowers (see the pictures) smells really exceptional. 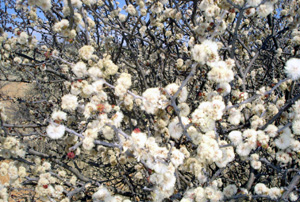 A late rain season however, brings the first rain in January or February. And these are the times and circumstances in the Kalahari that are the most testing to man, animal and plant, since real spring does not happen here until the first rain has arrived.

Dr. Willem D.Kotze* described it so good in one of his poems of the Kalahari. Directly translated, it reads:

This is what spring and early summer in the Kalahari is like.

(*Dr. Willem D. Kotze wrote wonderful and fascinating books about life in the Kalahari– also a series about a certain Bushman character. It is not yet available in English, but will entertain each and every Afrikaans reader!)

Summer in December, January and February

The summer climate in the Kalahari can have two faces: HOT AND DRY or HOT AND WET. 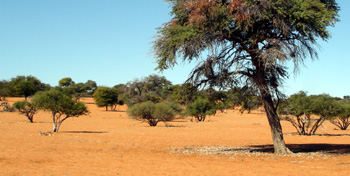 Summer in the Kalahari

A HOT AND DRY climate will be synonymous with extreme heat, the absence of any moisture, a blazing sun and further..... animals and mankind in their utmost fight for survival.

Temperatures can reach 43°C (109°F). Small animals will hide in burrows where ideal temperatures are maintained (in summer and winter). The bigger animals , like antelopes, use different strategies to adapt to these circumstances.

Luckily, the Kalahari cools rapidly as soon as it gets dark. To us, this is often a life-saving privilege. The coolness of the nights revives and restores energy of all living in these hot conditions. If you dare to come visit in a dry summer, you will know that the Kalahari is sometimes correctly called a desert.

A HOT AND WET climate will be synonymous with mornings of northerly winds, clouds building at noon and then unpredictable, patchy rain in the afternoon.

Rain in the Kalahari has a distinctive smell. You have to experience it to describe it. This smell means to those living here: food, water, new growth, flowers, rejuvenation of the red sands, lifting of human spirits and truly frolicking animals. 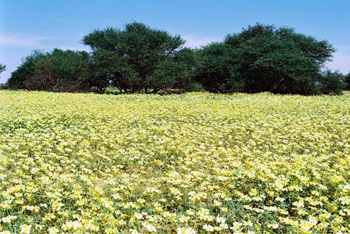 The Kalahari responds very quickly to rain even after a long period of drought. The region puts on its festive “outfit” and celebrates! Within a few days certain grasses and shrubs will be blooming and showing tips of new growth.

From all the above information about the climate of the Kalahari, you might remember that it is a land of extremes. Extremes in temperature and extremes in appearance.


We as a family know that every season in the Kalahari has something to learn from.

The "stage" of the Kalahari change often and dramatically. You should visit here more than once to get to know the whole “play” and thus to appreciate it for the wonderful part of creation it is. 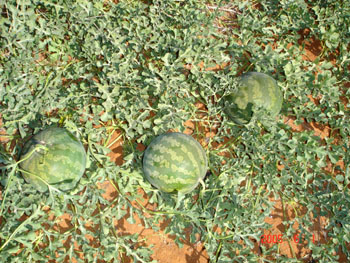